THE WORLD IS FINALLY TAKING NOTICE OF BRAZIL’s HUMANITARIAN CRISIS. BUT IS IT TOO LATE?

Which would you rather? Go to work in a face-to-face setting with no physical protection against COVID-19 in an environment where it’s spreading like wildfire, or see your children go without food?

If you thought the current situation in America was tough, that’s the dilemma those living Brazilian favelas face at the moment. After initially arriving in Brazil through those rich enough to travel to Europe or the United States for their February holidays, the novel coronavirus is now ripping through the deprived and densely-populated shanty towns (favelas) of both São Paolo and Rio de Janeiro.

With the focus of the world’s media focused on hotspots such as the USA and the UK, Brazil’s plight has almost flown in under the radar. Only now are people waking up to the fact that Brazil faces a dire situation that could potentially result in the death of millions of citizens before all is said and done.

Despite being the 6th most populous nation (209 million inhabitants), during April, Brazil was still comfortably outside the top 10 countries in terms of active cases of COVID-19. However, over the last 20 days, cases have multiplied at a ferocious rate. Brazil now has more active infections than the UK, Spain, Italy, and has now overtaken Russia. In fact, the  University of Washington’s Institute for Health Metrics and Evaluation (IHME), forecasted that over 125,000 could die by August as Brazil’s daily death toll climbed past that of the United States on May 25th.

What has NGOs and scientists extremely worried is that testing for COVID-19 in Brazil only takes place for individuals so sick that they have become hospitalized. Some estimate that the real number of cases is 15 times higher than that of official statistics. If that were true, then active cases in Brazil could number close four million, over double the number in America, and as much as 80% of officially reported cases.

Based on those figures, the gravity of the situation suddenly becomes very apparent. Which begs the question, how did they get to this point? The answer, from the point of view of the scientific community, is poor leadership.

Is Brazil President Bolsonaro Leading Brazil into Its Worst Ever Humanitarian Crisis?

A few weeks ago, the much-revered British medical journal The Lancet, took the most unusual of steps when they took aim at a political leader. Usually neutral, they lambasted the Brazilian President’s lax attitude toward the virus and labeled him personally as the single most significant public health threat to the country.

It’s hard not to agree with their assessment. Even a mere glance at recent events demonstrates Bolsonaro’s handling of the coronavirus has nothing short of scandalous. When asked about the number of cases spiraling out of control by a reporter, he replied, “So what? What do you want me to do?” His laissez-faire attitude to the virus (a “little flu” as he describes it), may have already cost thousands of Brazilian lives, and that number could reach millions before the end of the year. 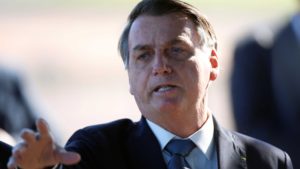 He is currently waging a similar war to that of President Trump, who is railing against the Democratic-controlled Congress, state governors and city mayors. Trump’s response to the pandemic is tumultuous at best. But Bolsonaro has gone one step further by severing ties with the political party that put him in power. He’s also signed an executive order for hair salons, gyms, and beauty parlors to open (whether they want to or not) and invited his state governors to “sue him if they didn’t like it.”

Since the crisis began, he has gone through two health ministers who found themselves in direct opposition with Bolsonaro’s reckless approach to the virus. Today, the health ministry is run by an army general, which is symptomatic of the political chaos unraveling within the upper echelons of the Brazilian government.

He, like Trump, has committed to the malaria drug chloroquine in even stronger terms by ordering every armed forces laboratory to produce the drug in vast quantities. As of yet, there is still no scientific evidence to say that it has any effect on COVID-19. In April, Brazilian scientists ended a study of chloroquine after heart rhythm problems developed in about a quarter of people taking the higher of two doses being tested.

Bolsonaro, himself, publicly flouts lockdown restrictions, makes a point of shaking hands with his supporters, and encourages his fellow Brazilians to do the same. He was elected as an answer to the deep economic recession Brazil faced five years ago, and his promised economic reforms have not had the desired effect. He knows that his leadership will be judged on the performance of the economy, which is why he’s enacting policies to protect it at all costs, including millions of Brazilian lives if necessary.

Why Brazil is Barreling Toward a Humanitarian Crisis

Despite the best efforts of Bolsonaro, state governors and mayors of the major cities have managed to enact lockdowns. The issue is that those within the favelas depend on the informal economy to survive. Thus, they are flagrantly ignoring restrictions to earn the money they need to feed their families. In large part, they support Bolsonaro’s fervent defense of the economy, as, without their jobs, they face the genuine prospect of starvation.

Furthermore, in the favelas of São Paolo and Rio de Janeiro, physical distancing and good hygiene practices are almost impossible to implement, with an average of six family members in each three-room property. Many buildings don’t even have running water for the purposes of hand washing.

With the virus running rampant within these communities, it’s only a matter of time before hospitals become overwhelmed which is now happening. Mayor of São Paolo Bruno Covas has said that hospitals (including several makeshift field units set up within the city) are already at 90% capacity, with less than 14 days left until that capacity is breached. As of May 26th, all but one of seven public hospitals in Rio de Janeiro state equipped to treat COVID-19 are full and can only accept new patients once others have either recovered or died.. The lone facility with vacancy is a two-hour drive from the center of the city of Rio. When the health system collapses in Rio and São Paolo millions of impoverished Brazilians will be left to fend for themselves. And the same is happening in four other Major Brazilian cities.

While other countries have tried to “flatten the curve” to avoid this outcome, Bolsonaro has insisted there isn’t one. The question now is, who will step in to prevent what could become one of the worst humanitarian catastrophes of the 21st century?