Blackrock’s Brazen Step to Reinvent Itself Around ESG

One of the first Americans to advocate what we know as reinvention was Benjamin Franklin, who said, “If you are finished changing, you’re finished.” More than 200 years later, today’s competitive business landscape requires intense executive adaptation and fresh ways of looking at how to reinvent business models. One of those imperatives is environmental sustainability one company is focusing on environment, social, and governance (ESG) metrics.

Many Fortune 50 companies train their executives on how to reinvent as a requirement to maintain a competitive advantage in today’s fast-changing business landscape. IBM publishes annual reports with new ideas for in-house executive reinvention. It’s quite right, today’s C-suite executives have no choice but to adapt as the competitive landscape in which they operate is itself continually being reinvented. When an executive takes a deep breath and commits to reinvention, that moment is not a hiccup in his career path. It is not a pause. Reinvention is a career accelerator and the most impactful decision a C-suite executive takes in today’s world.

Entering the third decade of the 21st century, decision-makers are greeted by an abundance of other initialisms. If ESG is one of those terms you haven’t heard before, then listen up. The sound of Environment, Social, and Governance metrics reverberates through the boardrooms of investment and enterprise C-suites. ESG is shaping global capitalism toward a new identity that reinvents the corporate profit model and transforms the ways businesses make decisions about everything from Cap-Ex spending to brand definition.

On January 14, media writers wrote ESG into their headlines and attracted millions of new clicks and eyeballs to their stories that included a hidden exclamation mark to the announcement by a leader in global investment. BlackRock published a letter to the business community, advising everyone to rethink shareholder value as the primary standard for measuring corporate profitability. Blackrock’s CEO, Larry Fink, declared that going forward, environmental sustainability is his company’s dominant metric for risk assessment.

Blackrock timed its announcement to capture maximum media exposure, coming just days ahead of the World Economic Forum in Davos, Switzerland. Larry Fink’s advocacy for a reinvention of the corporate C-suite business model is expansive. He wants public companies to modify their traditional ideas of maximizing profits for shareholder value. Fink is an advocate for the ESG business model that prioritizes sustainability and aggressively reallocates resources away from hydrocarbons and fossil fuels. His preferred substitute energy source is renewables. BlackRock calls the new philosophy “profits with a purpose.” 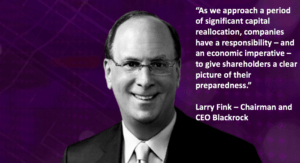 His investment management firm is the world’s largest with $7 trillion AUM (assets under management) and has become a leading platform warning that climate change is more than an environmental concern. Fink sees it as our generation’s greatest looming financial risk. He believes it falls on the private sector to manage financial risks from sea-level rise, burning of fossil fuels, and other costs precipitated by climate change. Going forward, BlackRock is incorporating the ESG model into its assessment of how well public corporations recognize their risks from climate change and whether they are making effective changes to their business models.

For those who don’t adapt, BlackRock has a warning. The firm may divest its investments in those businesses. Fink claims companies without ESG priorities are assuming too considerable a risk by failing to integrate sustainability into their business models.

This is not the first time the 67-year-old son of a shoe salesman is undertaking a reinvention of himself. He sees his new role is not just as an investment manager, but as a thought leader at a time when he believes risks from global warming are becoming impossible to avoid. He has created a whole new metric for determining those risks. This transformational decision for Blackrock was inspired by conversations with local governments who told him climate change is forcing them to pay more to finance debt in the private markets.

Bond investors see a greater risk for themselves in part because of the higher risk to local governments from future costs of sea-level rise, and water or air pollution in their communities. Fink sees an obvious need for coastal municipalities to reduce their debt expense and mitigate risks from climate change. BlackRock itself promised to invest more of its client’s money in local governments and businesses that focus on sustainability.

It takes courage to reinvent, and that is precisely what Blackrock’s Fink is demonstrating with its new risk metrics focused on sustainability.