I find today’s business world is full of CEOs and entrepreneurs who claim to be changing the world. They create and prioritize lofty mission statements and tell their colleagues to “be bold” and “take risks.” While it may be comforting to the CEOs or founders themselves, this simple lip service doesn’t mean that these individuals practice transformational leadership. Transformational leaders don’t need to articulate that they are transformative leaders. THEY JUST ARE.

That said, after studying transformative leaders over the past five years, I have gathered a much better sense of what makes them so great. One of those characteristics center on one word: Passion. In fact, these transformative leaders are “Passion Struck.” Essentially, they are so fervent and passionate about their mission that they are willing to pursue it to the ends of the earth—even if that means financial and career peril.

To better understand this phenomenon, I think it is helpful to analyze what Passion Struck actually means and some examples of leaders who best represent the phenomenon.

So transformational leaders are mission-oriented. That much is clear. They have a near-obsession (or actual obsession) about the problem that they are tackling. They think about it all the time. It keeps them up at night.

While passionate leaders may have some similar feelings toward their line of work, I’ve found Passion Struck leaders take it one step further. Specifically, those who subscribe to this transformational leadership style are willing to go further than their peers to accomplish their mission.

Yes, these leaders put their money where their mouth is and risk thousands (or even millions) of dollars. But even more striking is the fact that Passion Struck leaders are willing to put their careers or reputations on the line. They are so laser-focused on their mission that they are eager to become pariahs or outcasts in their industries. They shake things up and aren’t afraid to reason from first principles.

I’ve learned through my research that few entrepreneurs, athletes, business executives, or politicians are Passion Struck leaders. This transformative leadership style is rare. That said, three great examples I found are Keith Krach, Marc Benioff, and Jeff Bezos. I have worked directly with two of them and have witnessed their leadership first-hand.

Throughout his career, my long-term friend Keith Krach hasn’t been afraid to challenge the status quo. Keith is well known for taking on eight key transformations in his career, ranging from leading a joint venture that became the world’s largest robotics manufacturer to becoming the chairman and CEO of DocuSign and taking the company public. 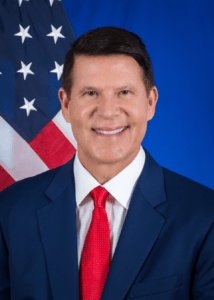 Keith Krach has taken on leadership roles in several different industries. And, he recently became the Under Secretary of State for Economic Growth, Energy, and the Environment. Yet this transformational leader isn’t afraid to challenge the status quo. For whatever problem he is tackling, he completely immerses himself and inspires his colleagues to think differently to find a novel solution. His transformational leadership style has led to amazing accomplishments that have made a profound impact on GDP per capita, international trade, and global sustainability.

Krach is also willing to listen to feedback and use it to alter his leadership. He once used an independent third party to have his team evaluate his strengths and weaknesses. The team came up with a handful of strengths and a myriad of weaknesses. While many would not know how to deal with this information, Krach instead made improvements to those areas that he could fix and learned how to hire for his weaknesses in areas that he had other deficiencies.

Marc Benioff – The Epitome of the Transformational Leader

Another Passion Struck leader is my long term mentor Marc Benioff. The founder and CEO of Salesforce, Benioff, has dedicated his career to defining and evolving cloud computing and ending the need for traditional software. Before software-as-a-service became an established business model, he evangelized cloud computing and its potential to replace traditional enterprise software. 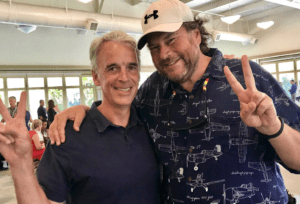 Starting Salesforce with Parker Harris, Marc Benioff left a promising role at Oracle to focus on creating a company that fulfilled that vision. From that day forward, he’s been passion struck with Salesforce and philanthropy. His optimism for the future and intense focus on making his vision a reality made him a magnetic personality that is known for his transformational leadership style.

Marc is a master of marketing and understanding the power of messaging. Like many Passion Struck leaders he possesses a relentless work ethic. During the early days of Salesforce’s existence, he traveled across the world where he spoke to groups of all sizes evangelizing the power of the cloud. By doing so, He defined a completely new market.

Finally, there is Jeff Bezos. The founding story of Amazon is legendary. What is less known among the general population is his real customer obsession. In meetings, he even leaves an open chair to represent the customer’s voice in the room. Jeff is obsessed with agility and believes business must constantly challenge the status quo

Even though he has high standards for his employees, Bezos commands respect within his company. His colleagues see him as a Passion Struck leader due to his foresight, customer obsession, command of technology, and optimism for the future.

The Power of a Transformational Leader

Ultimately, this transformational leadership style leads to significant value creation. These leaders not only make their businesses more profitable, but they make the world a better place.

It is challenging to become a Passion Struck leader and that is what makes this transformational leadership style so illusive. It’s unclear whether these leaders are born or made. Whether you believe you are one or work with one, it is critical to tap into this unique power. I contend doing so often leads to unbelievable results.

Ready to Speak with a peak performance coach? MAKE CONTACT