50 Years Later: How the COVID-19 Crisis is the Reverse of the Apollo 13 Mission

When the two NASA astronauts, Jessica Meir and Andrew Morgan, return to earth this week, it will mark 50 years since the very day the Apollo 13 mission, commanded by James Lovell, also landed back on earth. During Apollo 13 the Crisis Was In Space. 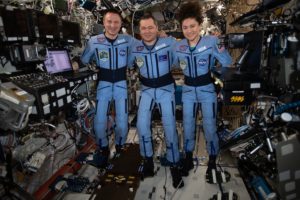 Although NASA believed the Apollo 13 mission was a failure, Captain James Lovell has always referred to it as “a successful failure.” Over the fifty years since their mission, his view has ultimately prevailed.

Fast Forward 50 Years Later, and now the COVID-19 Crisis is not in space but on Earth.

The Astronauts are watching in disbelief as our crisis plays out to them from space just like Apollo 13 mission played out to the world back then. But they can’t comprehend what is happening because they are not there. The world still looks the same to them as they look down on the Earth but they understand the world below them has fundamentally changed.
What did they experience while they have been on the ISS as this unfolded beneath them?
What will they experience coming back to a very changed World in the COVID-19 Crisis?

To learn more, read the full article posted on Medium.