How Being Vulnerable Can Expand Your World

I find that some of my friends and colleagues struggle with the concept of “being vulnerable.” You’ve probably seen or witnessed the same yourself, either at home or within the workplace or even in someone famous like Nicki Manaj,  Floyd Mayweather Jr., Adam Levine, or Gwyneth Paltrow.

There’s that one friend who is incapable of being wrong or the coworker who takes on too much and then deflects blame when it all comes crashing down around them. We all have these types of individuals in our life. They feel that admitting there are a few cracks in the image they want to portray is akin to failure, misinterpreting what it means to be vulnerable.

However, rather than being wrapped up in insecurities, being vulnerable is actually a dominant trait that enables more effective leadership and closer relationships. I was reminded of this fact after spending some time with Sara Blakely (founder of Spanx) a few weeks ago. During an interview with Inc. Editor-in-Chief Scott Omenlianuk, she revealed that vulnerability is one of her core values, and is a significant driving force of her success in business.

But why is this the case? Why are there so many business leaders and those in relationships who neglect to utilize the power of vulnerability? Is being vulnerable a strength or a weakness?

Pride Often Gets in the Way

As I wrote recently, no matter who you are, we all have an image of ourselves within our own minds. The truth is that our perception of ourselves is of a person who is a little smarter, more confident, and just a little bit better all-round than we really are. 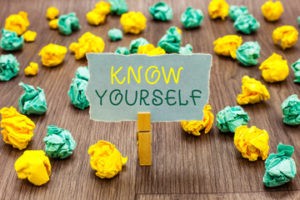 That was certainly the case for me in my early career. I was too proud of my projected self-image to be vulnerable. Part of that was attributable to my initial personal feelings that vulnerability wasn’t something that was part of my DNA as a man. Another stemmed from my naval training and subsequent service, which wasn’t conducive to vulnerability. I felt that admitting I was wrong wasn’t an option, and that being the “true” version of myself would have negative consequences.

When I came to start my life in the corporate world, I retained that attitude. But as I matured as both an employee, leader, and human being, I began to realize that vulnerability is beneficial in many ways. Today, I treat it as one of my most significant assets as a business leader and in my personal life. It’s completely changed how I view relationships, friendship, and work.

I Wondered What Does It Mean to be Vulnerable?

Being vulnerable is best characterized by letting go of the fear of what other people may think of the real you.

It requires unveiling your genuine authentic self, acting, and feeling as you naturally do, as opposed to putting up a façade to either fit a projected self-image, a person we long to be with, or to fit in with an audience.

It’s the ability to freely express opinions, desires, and emotions, regardless of how anybody else may perceive you for doing so. Whether that’s professing your undying love for a close friend, or asserting a potentially-upsetting opinion that differs from your favorite colleague’s. It’s putting your neck out on the line and accepting the consequences ahead of time.

But just because you know what it means to be vulnerable, that doesn’t make it necessarily easy to do. As social creatures, we are biologically hardwired to seek the approval of our peers. Baring all and becoming “emotionally naked” can be – some would quite rightly say – tough to do. However, those that master these skills become all the more powerful for doing so.

The Power of Vulnerability

Sara Blakely is by no means the only proponent of so-called “business vulnerability.” We have seen it in Ben Affleck, who just this week came clean about his struggles with alcoholism. Cleveland Cavalier Kevin Love’s viral letter about the power of opening up. Then there is the billionaire owner of the Virgin conglomerate, Richard Branson, who has long espoused the benefits of being vulnerable. 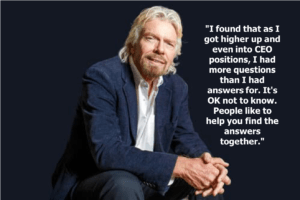 Branson believes that vulnerability is the key to building both trust and support amongst his peers and employees. By outwardly showing that he is not perfect, and regularly asking for help, colleagues feel that he is both approachable and empathetic. These traits allow his employees to come to him with concerns despite his status, in many cases revealing critical insights that have proved advantageous.

Mr. Branson is widely-recognized as what I have described as a passionate-struck business leader. His vulnerability in expressing his passion for getting normal individuals to experience space back in 2004 (long before the idea was considered rational) has allowed him to secure billions of dollars from leading investment institutions and corporations such as Boeing. What’s more, it looks like Virgin Galactic is set to win the space tourism race. In other words, a vulnerable leader is a more effective leader.

This so-called “power” that vulnerability bestows on business leaders, as well as those from other walks of life, is perhaps best explained by Brené Brown in her book Daring Greatly. She explains that the power of vulnerability emanates from an almost backward logic. By revealing all your weaknesses, flaws, and limitations, you actually become more irrepressible and formidable than ever before.

The work by Brown, and the example set by Blakely, Love, and Branson, helps to dispel the popular perception of vulnerability. The myth that vulnerability implies weakness is one that is keeping leaders from being more productive.

In fact, it should be a vital tool in every emotionally intelligent leader’s toolkit, using it to take a step back and assess your business through your employees’ eyes. I’ve learned through experience that by connecting with your employees on an emotional level, they become much more invested, and the work they carry out takes on a much more considerable personal significance than the paycheck they receive in return.

Being Vulnerable Isn’t Easy – But You Should Try It All the Same.

Becoming comfortable with your own emotions, your weaknesses, and your flaws are the first steps toward vulnerability. However, expressing those same thoughts and feelings without inhibition is another challenge altogether. It’s important to note that becoming more vulnerable in both the workplace, in your friendships, and in your relationship is a process. A process that takes a great deal of time.

In my case, it took years for me to come to terms with it in its entirety. But once I felt comfortable being vulnerable, I soon developed the ability to use this valuable trait to empower both myself and those around me. I was able to create more meaningful relationships, achieve enhanced employee buy-in, and deliver more emphatic results.

Therefore, if you’ve never given it a try before, I suggest you do so. Tell a close friend when they said something that hurt you or ask a girl out even if you’re terrified she will say no. Perhaps contribute to a work meeting with something that you want to say, rather than with something you think other people want to hear.

It won’t be easy; it’s a journey of self-discovery, just as we have seen with Ben Affleck, Sara Blakely, Kevin Love, and Richard Branson.

But, in the end, I promise it will be worth it.