For me, there’s nothing more liberating than going for a run. Somehow, the simple act of putting one foot in front of the other accompanied by nothing other than the sound of my shoes hitting the gravel path beneath me has the ability to free both my mind and soul. Once I’m deep into a run, there are no thoughts concerning which bills my business needs to pay or about an uncharacteristic mistake I made at work. Instead, I’m in an almost meditative state, letting negative and troublesome thoughts slip away as I enjoy my natural surroundings and the sound of my breathing.

It’s a state that I first became hooked on at the age of 14. During middle school, I had gained a little weight, and as I started life at York Catholic High School in York, PA, I wanted to give running a try in an attempt to shed some of those excess pounds. But that wasn’t my only motivation. Running as a sport genuinely interested me.

I would watch from afar in awe as teammates Brian Strong, Rob King, John McChonville, and Keith Dowling (Three-Time All-American at University of Pittsburgh, Pittsburgh Marathon Hall of Fame, and 1st placed American at the Boston Marathon in 2002) would put themselves through the wringer with 400m repetitions on the York College track. At first, I thought, “why would anyone want to do that to themselves?” But seeing their passion and dedication spurred me into action, and to give running a chance.

Looking back, I’m so glad I took the plunge. 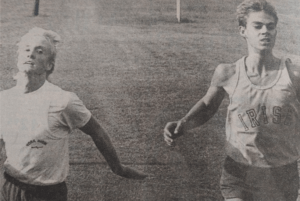 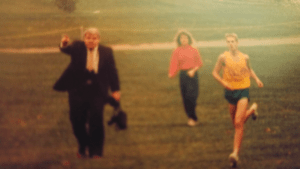 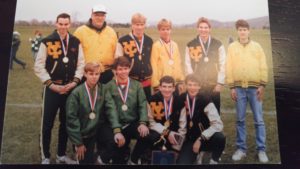 Running gave me so many incredible experiences (such as winning the high school State Cross Country Championships with the aforementioned Dowling, Strong, and King) as well as lifelong friendships that I still cherish today.

It also helped me to secure a place at the Naval Academy, where I ran both track and cross country at the highest tier of the collegiate system (NCAA Division I). This time with Navy Legend and my classmate Greg Keller who was the first Midshipman ever to get 12 N-Star’s for beating Army. But being a good runner didn’t just give me a leg up of the ladder of life, it taught me some valuable life lessons. 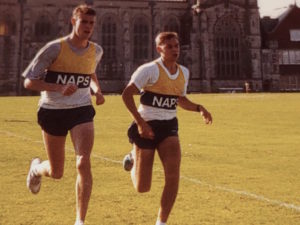 Here are four of those life lessons from running that still have a significant influence on my life to this day:

1. Goal-Setting is a Powerful Tool

“If you want to be happy, set a goal that commands your thoughts, liberates your energy and inspires your hopes.” – Andrew Carnegie

As a competitive runner, before you’ve even laced up your shoes for the first run of the season, you sit down with both coaches and teammates to set goals for the season ahead. The common goal is usually for the team to perform well at the Conference, Regional, and then the National Championships.

However, there are always specific performance goals for individuals. I knew before I’d even attempted my first workout of the year where I was aiming to place in each race of the season, and what sort of times I would need to be hitting in training to achieve those marks come race day. Those goals drove me on in every workout, through the tough periods, and the inevitable setbacks. Without them, I would have only achieved a fraction of what I did as a runner.

This skill is just as important in life as it is in running. If you never set yourself goals, you can find yourself drifting through life without achieving what you’re capable of. Even if you fall slightly short of your desired outcome, when you compare where you were before you set your goal and where you are after, you’ll be considerably further forward towards your overarching aim than if you’d never set one at all. Goals help you stay focused, drive you on to get through the challenging periods and aid personal growth. If you don’t yet set yourself goals, I suggest you make a start today.

2. Overcoming Adverse Conditions is About Mindset

One of the biggest life lessons from running cross country throughout my high school and collegiate career was overcoming challenging racing conditions. During cross country season, I had the pleasure of dealing with snow, rain, and even hail during the cold months of fall and winter. In spring and summer, track threw up similar challenges with extreme heat and humidity.

One of the most important skills I acquired from running was the ability to put all of that aside and focus on my performance. I always reminded myself that the conditions were the same for all of my competitors. If I was soaked and cold, so were they. If I was struggling to deal with stifling heat, then so were they. I quickly learned that it was whoever concentrated on the race, not the conditions, that performed the best.

I find the same is true of life. When there’s economic turbulence (such as the recession of 2008), those who spend months blaming the external factors for their difficulties are left behind by those that get on with the task at hand. By contrast, they adapt, evolve, and overcome the challenges that those new conditions entail. Business leaders who successfully steered their companies through those conditions back in 2008 remained focused on delivering company objectives amid the new climate, rather than claiming that those very same conditions rendered achieving those goals impossible.

3. Self-Discipline is One of the Keys to Success

Running is one of the toughest sports on the planet. It requires training twice, and in some instances, three times a day, almost every day. Covering over 100 miles a week at speeds that seem alien to the average jogger is just part and parcel of a collegiate runner’s existence. 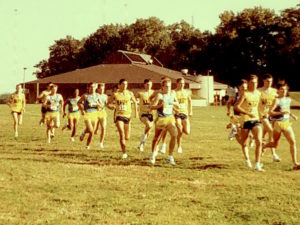 To do so requires an enormous amount of self-discipline. It requires going to bed on time every night, including on weekends, when all your friends are heading out to parties. It doesn’t matter whether it’s Wednesday or Sunday morning, you better be at the team’s meeting spot at 5:30 am ready to bring your A-game. As the world’s greatest distance runner says above, it’s about doing what you should do, not what you feel like doing. It takes an enormous amount of self-discipline to head home to cook a nutritious meal that will fuel the next workout rather than gorging on pizza with classmates after a stressful exam.

The number of times that I had to say “no” to my friends is beyond counting. But by doing so, I built up a considerable amount of self-discipline. No matter your walk of life, self-discipline is crucial. Saying no to a donut when you’re on a diet could prevent you from losing control and spiraling again. Turning down friends who want to meet for drinks when you’ve got your CPA exam coming up can make all the difference come test day. Life will always test you, but if you’ve got the self-discipline to stay on the right path, you’re much more likely to end up at your final destination.

One of the biggest life lessons from college sports is the ability to balance multiple priorities at once. As a collegiate athlete, you are expected to perform in racing and training, as well as in the classroom. That’s without mentioning trying to maintain some semblance of a social life or holding down a part-time job to help with the costs of tuition.

As an athlete you very quickly adapt to these strenuous demands by developing a personal schedule that allows you to maximize the amount of time you can devote to each vocation. Those who fail to do so – merely jumping from one priority to the next – often found themselves struggling to keep their GPA high enough to be eligible to compete. By committing to a schedule, I was able to maintain optimum performance levels in the classroom and for the team. I also managed to make lasting and productive relationships with individuals from outside of either realm.

I feel this skill serves me particularly well today. I’m always juggling my time between my businesses, speaking engagements, writing and publishing articles, and my family time. Without the ability to effectively plan my time on a daily, weekly, and monthly basis, one or more of those areas of my life would suffer. Thanks to running, I have over two decades of time management experience under my belt and can handle the rigors of my demanding schedule with ease.

As you can see, there are many life lessons from running that still serve me well just as well today as they did back then. Perhaps the most important of those was self-discipline. It’s a quality that has helped me immensely throughout both my naval and business careers, and it’s one of the biggest lessons I try to impart on my mentees.