Why is Intellectual Humility Vital to Your Success?

Regardless of your self-identity, we envision a version of ourselves that is far different from how the world pictures us. In most cases, the way we see ourselves is glamorized into someone more intelligent, more decisive, and more liked than who we really are. And that reasoning begs the question why is intellectual humility vital to your success.

We all want to feel self-important, and there is nothing wrong with that. It is great to have self-confidence. I would say it actually is vital if you’re going to have a passion struck life. But, the problem with inflated self-worth is that it can lead to an ego problem, which can become a massive liability.

Let me illustrate through a personal story.

Click the picture if you want to watch my episode of the Passion Struck Podcast. 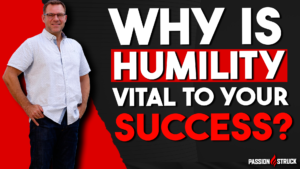 The Impact of Not Using Intellectual Humility

A few years ago, I was working as a consultant with a company, and my client’s son had recently gotten a new job with one of the scooter companies in charge of new market development. The father thought that landing the Tampa Bay market, which is the 12th largest in the country, would be a great initial win for his son. And, he knew that I had connections with the mayors of both St. Petersburg and Tampa and their respective staffs. He asked me if I would help his son out. I was reluctant but eventually said yes.

You see, the rumors about his son were that although he was astute and was Ivy-league educated. However, he also had a vision of his self-worth the size of Texas and had just come off a stint working in the Trump administration. However, I had never met him, so I decided to give him the benefit of the doubt.

I used my personal contacts and set the meetings up. As we approached the meeting with the Mayor of Tampa, I reached out to the son about finalizing the agenda and our attire for the meeting, which I suggested be formal. I received zero responses. I tried again on the eve of the meeting and received a text I will never forget.

“I got both your messages. I ignored the first because I thought it was demeaning. You realize I am a Princeton graduate, an attorney, and just left working for the white house, where I routinely briefed the President. You must either be inept or very inexperienced if you do not think I know how to handle and what to wear to this meeting, especially with a third-rate Mayor.”

I looked at my smartphone with disgust and anger. My first reaction was to type a direct and pointed response. Instead, I thought the better of it and showed the father the text. He reassured me that this was just a misunderstanding and pleaded with me not to go forward with the meeting. I should have trusted my instincts to call the Mayor and cancel it.

The next day, I met up with my friend from a local public relations firm, a lobbyist, and one of the most powerful city council members. We were all dressed in suits as that was the protocol for an appointment with Mayor Buckhorn. That was when the young man rode up on his scooter wearing jeans, a t-shirt, and converse sneakers. All of them gave me a look of bewilderment. However, I could do nothing at that point, and we went to meet with the Mayor.

Mayor Buckhorn entered his meeting room and, after greeting us, turned to the young man and said,

“Sonny, my time as Mayor is coming to an end. In those 8 years, I’ve been in meeting with thousands of people in this conference room. You are literally the first who has attended one wearing a t-shirt, sneakers, and jeans. I expect and hope that your presentation will be much more astute than your choice of attire.”

Sadly, it did not. The son had done little to no research on the Mayor and used a canned pitch deck from his employer. The Mayor, to his credit, listened intently and even stood on the scooter for pictures, but we all knew the meeting was a colossal failure.

I had not left the meeting for five minutes when my friend called me on my phone and ripped me a new one. That is because the Mayor had already called him, given him his feedback, and warned him to never waste his time again.

Why did this happen? Because the young man let his ego get the best of him and failed to demonstrate humility.

Why Is It Challenging to Foster Humility?

I’ve realized how difficult it is to foster humility and predominantly intellectual humility through my long career. From my study of it, I’ve learned there are three main challenges on the path to acquiring humility:

1. Learning that we all possess blind spots. To act with more intellectual humility, even the smartest among us, we need to better appreciate that we all have mental blind spots. Our cognitive capabilities are more imperfect and imprecise than we’d often like to admit or demonstrate. Our ignorance can be imperceptible.

2. Being able to admit you are wrong. Even when we overcome those big blind spots and figure out our errors, we need to remember that it is not only acceptable, it shows strength to say, “I was wrong.” And we need to be braver about admitting it. We need to create a culture that celebrates those words.

3. Learning the art of tact and diplomacy. No matter how hard we may try, it is almost impossible to achieve perfect intellectual humility. So we need to ensure that our convictions are well placed and act with tact and diplomacy when interacting with others.

What is Intellectual Humility?

Intellectual humility is admitting that your ideas and beliefs might not be accurate. But don’t confuse it with the idea of being bashful. It’s not at all about being weak; it’s not about low esteem or self-worth. Those who practice intellectual humility don’t run in the other direction anytime their thoughts are challenged.

Instead, it’s a method of rationalizing the situation and listening to the other person (or persons). It’s actually having the self-confidence to understand that you may be wrong and then having the willingness to learn from others’ experiences.

How often do we have friends who take a hard and unwavering stance on a topic or idea? They become so self-righteous about that belief that they fail to hear any other point and instead argue their side and fail to seek or acknowledge anyone else’s opinion. In fact, if you give it, you are plain wrong in their mind.

Why is Intellectual Humility Vital?

I find humbleness is one of the least appreciated and underrated virtues but one that some of the most outstanding leaders I have met and worked with possess. Intellectual humility is vital because none of us is all-knowing. No single person can ever be right about everything, and therefore, our perspective is always going to be limited. This recognition leads to learning to elicit as much feedback and expertise as they possibly can.

To possess intellectual humility doesn’t necessitate a high intellect or trade. However, it requires us to challenge our internal beliefs and thoughts, which can be painful.

When we have humility, we become so much more potent than without possessing it. That is because we can strengthen our self-confidence and, in turn, our position. After all, we are actively seeking out the opinions of others.

How Do You Practice Intellectual Humility?

To try to practice humility, you may want to try one or more of these activities:

Practice the Art of Diplomacy

One of the most critical aspects of humility is learning to value others and listening to what they say. It is vital to understand the emotional state of the other person. This starts with observing their behavior and listening to the intent and tone of their words. We can draw out their feelings and values, enabling them to provide us valuable feedback. It is a potent skill to possess and one that will help you preserve relationships both in your career and personal life.

To understand why this is so vital, it is essential to realize that you are not trying to always have your way or that your opinion has to be correct: just listen and respond to them as you would hope they would react to you and do it with kindness.

There is more about this in my article on Diplomacy.

Be Tactful, and Focus on Being in the Moment

A crucial part of humility is understanding how to deliver sensitive information in a way that preserves or fosters relationships rather than judging and disrupting them. A vital element of being humble is knowing how to talk to other people and promoting honest communication. When we use tact, we are preserving relationships and fostering dialogue.

That doesn’t mean you shouldn’t be deterred from delivering difficult information, but understanding how to do it in a way that focuses on the outcome and not on yourself.

There is more about this, including some beneficial practices, in my article on  The Bold Skill of Being Tactful.

Use The Power of Vulnerability to Foster Intellectual Humility

Being vulnerable lets go of the fear of what other people may think of you and allows them to see you for your true self. This is, perhaps, one of the hardest things for us to do but one of the most important to act with humility. Often, those who lack humbleness do so because they lack self-confidence and esteem. They try to show others up because they lack self-awareness and feel threatened.

There is more about this in my article on How Being Vulnerable Can Expand Your World.

Play Big And Let Go of That Ego

Why we play small in our life, we are coming from a place of pride and arrogance. It can sometimes be hard to avoid a feeling of fear, doubt, or uncertainty. But, it is reckless to cover it up with vanity because you don’t want others to realize your self-limiting beliefs.

When we play big, we are living our life with confidence and unlocking our full potential. We learn to confront those attributes of smugness, snobbery, and arrogance that cause us to have a big ego. We learn to embrace humility by being more open to critique and self-growth.

There is more about this in my podcast on Why We Need to Stop Playing Small.

I’ve learned that you can never go wrong by looking for ways to improve yourself by listening to the feedback of a loved one, friend, or peer.

However, when we lack humility, we end up focusing inward. Pride consumes us, and we end up with a huge ego problem.

When a person’s mentality, like the young man’s from the story, is self and self-preservation first, it’s a sure sign of pride and immaturity.

Instead, we should strive to understand that every human being is equally valuable. That recognition should lead to us living our lives in the way of realizing that we are worth no more or less than anyone else. This answers the question why is intellectual humility vital.

This article was inspired by the Passion Struck podcast  I did on why intellectual humility is vital to success. Listen to the Passion Struck Podcast anywhere you listen to podcasts online. For more information, if you are in a toxic relationship, click here.

Make a choice, work hard, and step into your sharp edges.

Ready to Speak with the Problem Solver ? MAKE CONTACT