Elon Musk is such a unique and talented entrepreneur for countless reasons. But I think that one of his most striking qualities is that he has an acute sense of maximizing his day’s output while exercising tremendous patience toward his stunningly-high goals. That is a concept I refer to as the Bee and Turtle Effect.

His disdain for excessive meetings is quite well known. Instead, he prefers to fill his schedule with technical and engineering tasks so that he can get the most out of his days. As he famously did during the ramp-up of Tesla’s Model 3 sedan, Elon slept on the Tesla factory floor, ensuring that he was solving production issues as quickly as possible and suffering more than any of his employees.

But beyond the insane amount of day-to-day output that Elon gets, he keeps the long-term in mind. His long-term goals of a mission to Mars and multi-planetary societies aren’t yet realities, yet he doesn’t give up. He embraces patience while working tirelessly to make these goals a reality.

But it wasn’t always the case. Although Musk had a long-term vision and never-ending work ethic, he hires others around him to concentrate on the details and make steady progress toward the end goal. 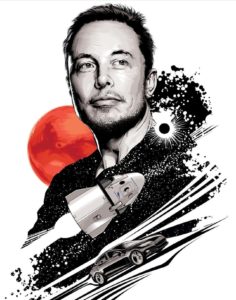 Elon and other passion-struck leaders like him deftly navigate this balance between acting quickly and efficiently in the present while biding their time for their vast long-term goals. You can think of this as the bee and turtle effect.

Combining Bees and Turtles to Change the World

Bees and turtles are diametrically different creatures, yet some of the greatest entrepreneurs and leaders borrow traits from both to create massive change.

Bees, particularly worker honey bees, are widely known for being busy and productive throughout their days. Worker honey bees spend nearly their entire days outside, making more than 100 foraging trips per day. They are laser-focused on the day’s mission and work tirelessly to make their short-term goals happen.

On the other hand, there is a turtle. For instance, sea turtles are known for going on some of the longest migrations in the world. These migrations are critical, as they are often migrating between foraging and nesting grounds. The journeys are quite long—sometimes thousands of miles—yet they keep this long-term goal in their minds as they grow and reproduce.

A decade ago when the commercial program was born, few experts gave the fledgling start-up, SpaceX, little if any hope of taking on and even less in beating the Boeing behemoth in the “race to return to space.” However, with the first-ever launch, of a privately-owned human-crewed spacecraft, Elon Musk and SpaceX changed history forever and took a giant leap towards a mission to Mars.

It is a perfect illustration of the Bee and Turtle effect and a defining moment for Elon Musk.

I recently interviewed former NASA Astronaut Captain (CAPT) Wendy Lawrence, for my upcoming book Passion Struck, where she revealed a fascinating story about Elon Musk and SpaceX that rarely gets much attention. It all started in 2006 at the onset of the Commercial Orbital Transportation Services (COTS) program. Musk forever changed history by using the bee and turtle effect to win the “race back to space.”

When it was clear from President Bush that the shuttle was going to be retired, NASA set up a division to go figure out commercial spaceflight and provide commercial companies the opportunity to provide services to NASA. The commercial program leaders had the foresight to structure the statement of work in a way that companies if they wanted to, could bid on delivering cargo. And, they could also bid to develop the spacecraft to carry crew members back and forth from the ISS.

And that is precisely the approach Elon Musk took — HE DID BOTH SIMULTANEOUSLY.

According to CAPT Lawrence, “SpaceX was the only company from the get-go who decided they wanted to do the full work scope. They made a great decision to design Dragon so that not only could it be used to carry cargo, but they also modified some of the systems for crewed flight. They looked at capsule design capability and determined that they could develop an overall outside design for capsule profiles that would allow them to modify it for the crew.

That is why SpaceX is so much further along than Boeing. They decided to do the entire scope of work upfront so it can be used for both functions without a significant amount of changes. It was ingenious on their part.”

Using the power of the Bee and Turtle effect, Musk created the long term goal of crewed flight while also focusing on maximizing daily output along the way. By doing so, when it came to the task of flying astronauts, SpaceX created an edge. Because they focused on daily micro-steps, they’ve been flying cargo and supplies to the space station since 2012, giving them lots of practice (almost a hundred flights) in launching spacecraft to orbit and having them meet up and dock with the station.

SpaceX today is widely recognized as the world’s most successful private space company and is eclipsing the “sure bet” Boeing with significantly less funding. The company combined the short term goals and agile work ethic of the Bees (cargo delivery) and coupled it with the slower long-term approach of the turtle (crewed exploration).

As a result, through SpaceX, Musk is almost single-handedly leading the charge to land humans on the Moon and later Mars.

Applying the Bee and Turtle Effect in Our Own Lives

This balance of efficiency by day and long-term planning by night is critical for world-changing success, yet many struggle to strike this balance. For younger people with ambitious goals, lack of patience can rear its ugly head. It’s easy to see 20 and 30-somethings with millions of followers or on the cover of magazines and think: “Why haven’t I been as successful at this point in my life?” It can be extremely frustrating, especially if you have achieved substantial success in your early life.

On the other hand, some of us may be patient, but may not have the urgency to maximize our daily output. Whether from fear, indecision, or something else, the calendar keeps advancing while we are stuck in our own heads.

These are real challenges. But having said this, your lack of patience or lack of efficiency is not a death sentence for your dreams and high goals. You can shift the paradigm—so long as you shift your thinking and work on these psychological shortcomings.

Ultimately, much of this comes down to mindset. If the lack of patience is frustrating, you work hard on perspective. It helps to read the biographies of some of your heroes, as it will likely show you that the road to success was longer and more perilous than most people think. Meanwhile, keep executing and being efficient on a day-to-day basis. The perspective will help you be more patient as you continue to make things happen every day.

If you have patience but struggle to be productive on a daily basis, I encourage you to take small steps. Action is everything, even if you are taking a tiny step toward your huge goal. You want to get in the habit of taking action—even in the face of massive uncertainty. You may fail at times, but also though failure, you are building your hustle muscles. Acting will become second-nature to you. Combining your action-first mentality with the power of patience, you will be significantly closer to that long-term goal.

Grasping the Best of Both the Bee and the Turtle

Leveraging the bee and turtle effect can help you seize the day while staying patient. It satisfies your desire to see progress on a day-by-day basis while keeping the long game close to your chest.

Passion-struck leaders like Elon Musk intuitively recognize the power of both productivity and patience. But even if you are missing one side of the equation, the good news is that you can improve. You can be more like the bee or turtle.

By focusing on this fact and shifting your mindset, breakthrough results will undoubtedly happen as you make your long term objectives a reality.